Thank you for your years of devotion to figuring out the lost aim of the real masters and for your patience in learning how to teach it. I am certain you have grasped the essential tools those masters relied on in expressing what they chose to express. 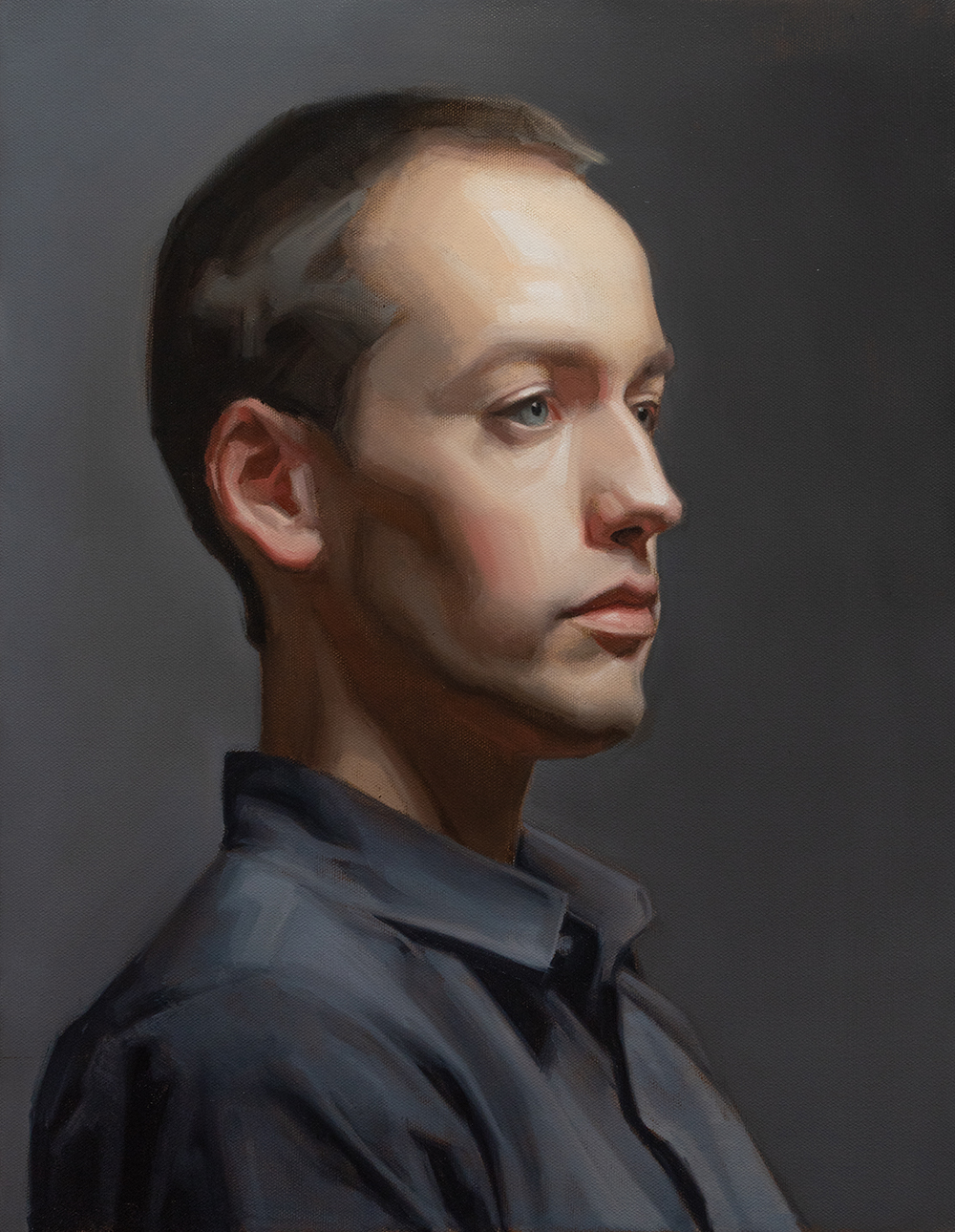 What constantly inspires me about Marvin; it's his unstoppable drive for excellence, in relation to his teaching methods, the progress of his students, his own work, and his life as a whole - this is undeniable to anyone that studies with him.

Not only does his teaching translate just as well virtually as it does in person, but virtual study actually surpasses in-person study due to the variety of complicated yet elegant video streaming techniques Marvin utilizes - in turn, this supercharges the student's learning.

Marvin's credo is that any job worth doing deserves to be done exceptionally well. When the pandemic hit, and Marvin was forced to shift his portrait painting classes to online learning, he hoped he might find a way to simulate the experience of being in a live classroom. However, he never anticipated that this new technology could provide him with the tools to dramatically enhance his teaching.

While other teachers were trying to make the best of a bad situation, using standard laptop webcams, Marvin set out to master live streaming technology. Marvin has always believed that demonstrating every aspect of his teaching – while meticulously breaking down the purpose of his every action – is the most effective way to teach visually oriented students. Since demonstrating, is the key component of his teaching methodology, he engineered, after exhaustive research and much trial and error, a three camera set-up which enabled his students, for the first time ever, to actually see incredibly detailed close-ups of his demonstrations. Now his students have the ability to follow his every brush stroke, in high resolution, when previously, in a physical classroom, they were forced to stand at least ten feet away to avoid blocking their classmates' views. Now, in addition to hearing him describe the reasoning and purpose behind every action, they can actually see it manifested in real time.

As important as it is to see the paint applied, it's even more critical to watch how the color is mixed. In a live studio, this is an absolute impossibility, because it would require Marvin, prior to the application of his every brushstroke, to step away from his easel, walk towards his students and show them how he arrives at each mixture. But now,  with the mere press of a button, he can seamlessly transition between the painting and a dedicated camera focused solely on his palette, allowing his students to witness the mixing of every color and it's application, thus adding a totally new dimension to his students' learning experience. 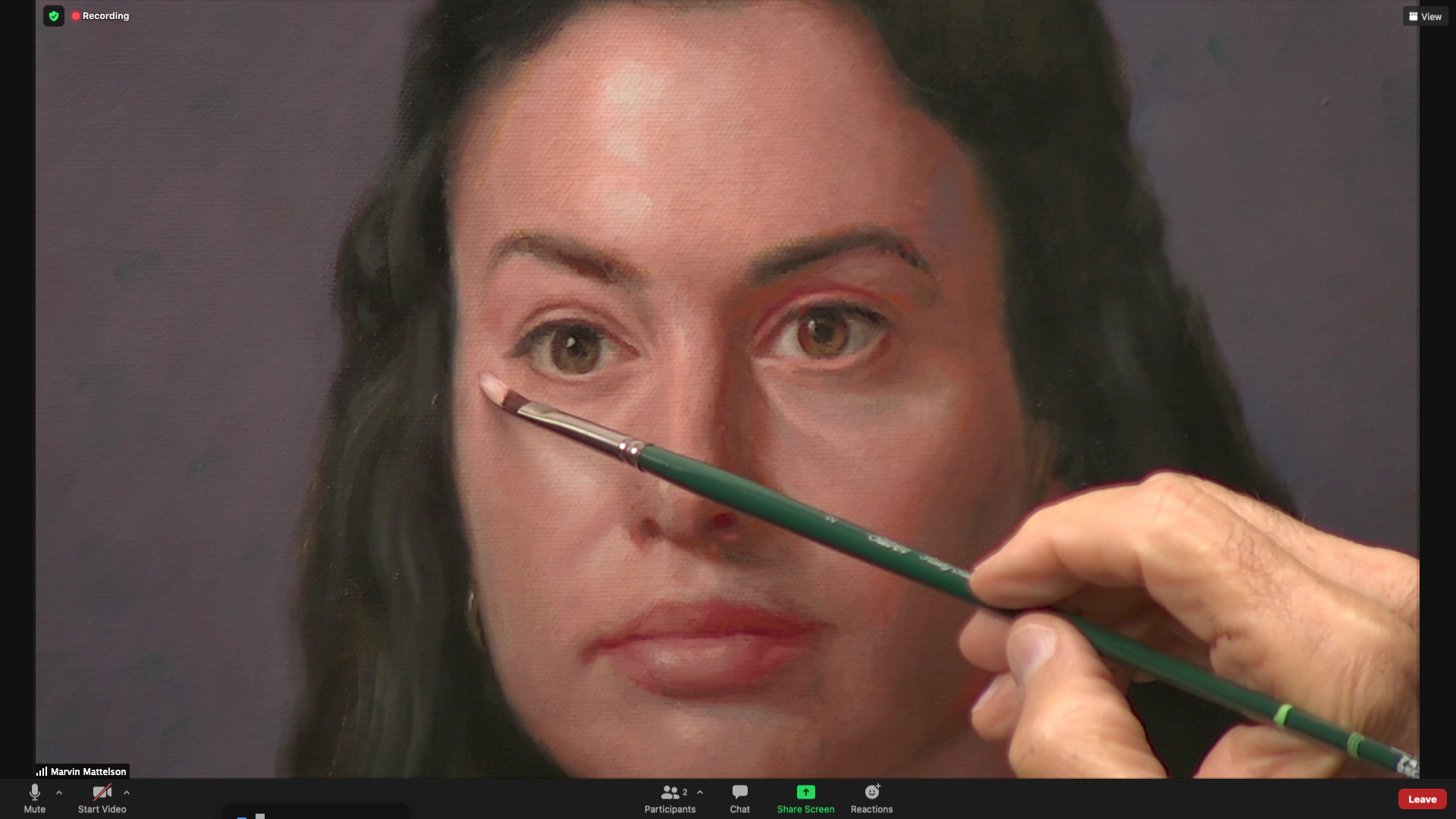 After purchasing cameras capable of broadcasting in high definition 1080p resolution, Marvin was frustrated to learn that, in order to preserve stability, the vast majority of Zoom meetings use an inferior low-quality resolution, which meant much of the detail his cameras were capable of providing would be for nought. After much digging, he was relieved to learn, that it was possible – for a steep premium – to upgrade to a more powerful router and an Enterprise Zoom account. Since it meant he would be able to harness the full capabilities of his cameras, and thus offer his students a far superior high-quality video feed, he gladly paid the price. To guard against the possibility of a power outage he had a standby generator installed as well.

When formulating the best way to create the ultimate digital learning experience, Marvin considered every option. Previously, his students worked exclusively from perfectly lit live models.  Since live models in the pandemic were verboten, he had to weigh his options. The advantages of working from live models are that you can experience their three-dimensionality, you can move forward and see details, and you can observe all of the color nuances. The frustrating issues of painting from life are that most models move and as a result, the pose keeps changing to some degree. More importantly, your painting time is limited by the number of hours the models are actually posing.

Not only does his teaching translate just as well virtually as it does in person, but virtual study actually surpasses in-person study due to the variety of complicated yet elegant video streaming techniques Marvin utilizes - in turn, this supercharges the student's learning.

Some classes are opting to work from remote Zoom models, but the low resolution images eliminate a lot of detail; the color is awful; the temperature and quality of the lighting at each model's location is less than ideal; obviously there's no experience of 3-D space; plus, you still have the issue of models moving, not to mention, the time limitations. In other words, you have none of the plusses of working from life, yet all of the minuses, so Marvin ruled this out. 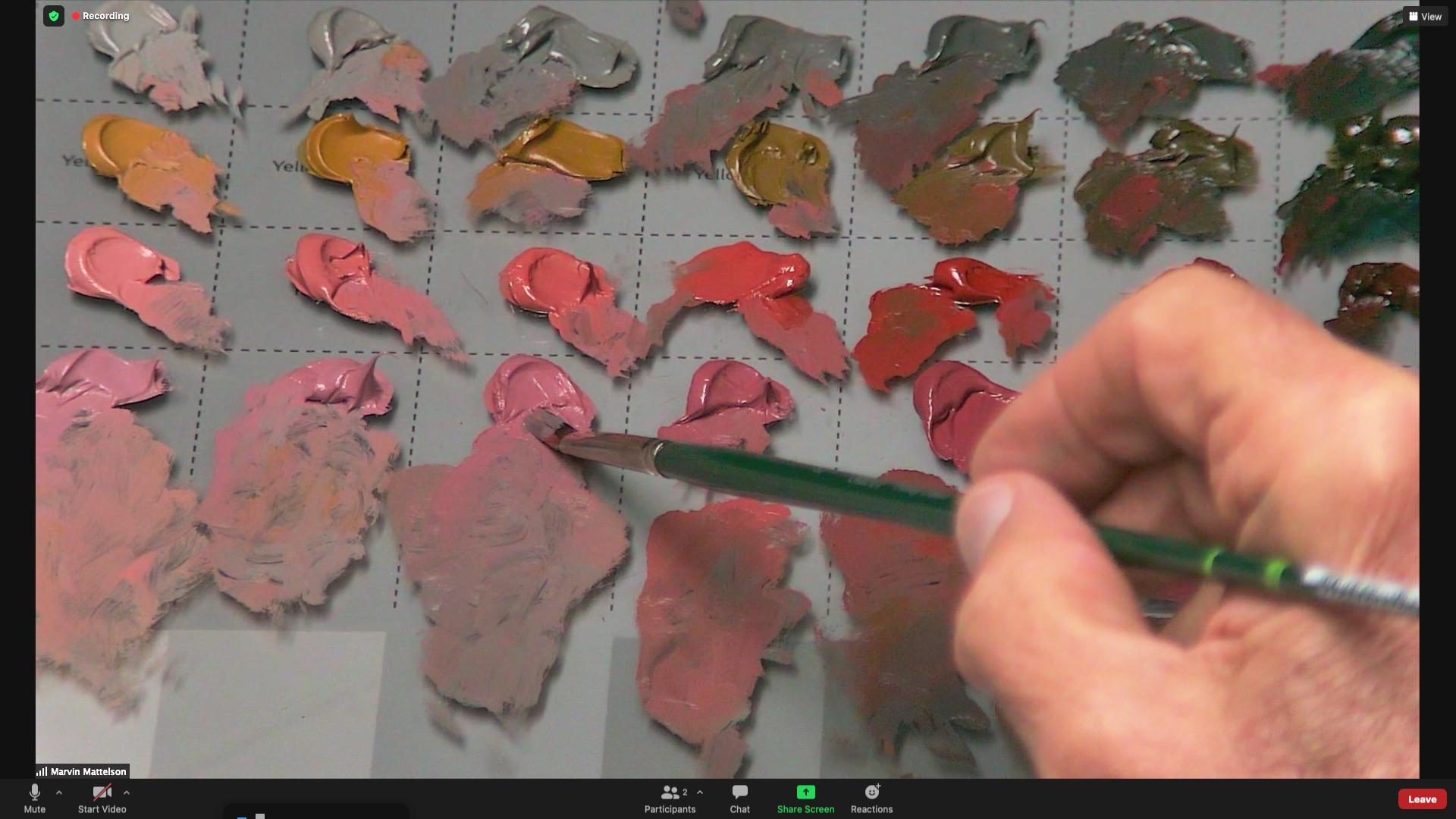 Instead, he felt the best course of action would be to provide his students with color-corrected, high-resolution photo reference. Having high quality photos to download enables each student the luxury of working on their paintings without being constrained by model availability. This addresses every issue except for the 3D aspect, however when you study with Marvin, you will learn that creating a three dimensional illusionistic painting, has little to do with copying what you see, whether it's from a live model or from a photo. Marvin also provides extensive instruction on photo techniques and lighting for those who prefer to paint a model of their own choosing.

Over the years Marvin has fielded many requests from students, outside of the New York area, asking if he could provide video instruction. But, one of the major shortcomings of videos is that they eliminate the important interactive component, and thus deny a student the opportunity to ask questions, make comments and especially to receive critiques. Feedback may very well be considered the most important component of learning. It's not unusual for a student to misconstrue a basic concept or tenet. Marvin can easy breakdown any problems and reinforce the students understanding of the underlying principles. Unfortunately, the ability to physically converse, and connect one to one, is no longer possible in a virtual classroom, but Marvin feels that over the course of the class, he still has the capability to establish a solid rapport with each student.

The ability to interact with a teacher is invaluable. Unlike videos or “chat based” instruction, the student can ask questions in real time, a format that best replicates in-person learning. In addition, Marvin will answer ANY question, no matter how simple or complex. His explanations are not arbitrary, but based on facts, on proven methods. He demystified many aspects of painting with which I’d been struggling for years.
Marvin works with each student at their level. He makes no comparisons to others’ work, stressing instead the goal of improving, of making each piece better than the piece before.
Unique to Marvin’s course is his state of the art technical set-up (flawless hi-def video connection) and a virtual museum tour that offers invaluable insights and analysis of master works.
In short, Marvin has the ease, confidence, and humor that only comes from years of experience, both as painter and teacher.

The advantages of studying with Marvin online far outweigh any minor shortcomings. For example, every participant can now fully benefit from each of their classmates' critiques, whereas in a large physical studio space, poor acoustics made it impossible to hear, what could be very relevant information, unless you happened to be standing very close to the student Marvin was talking to. 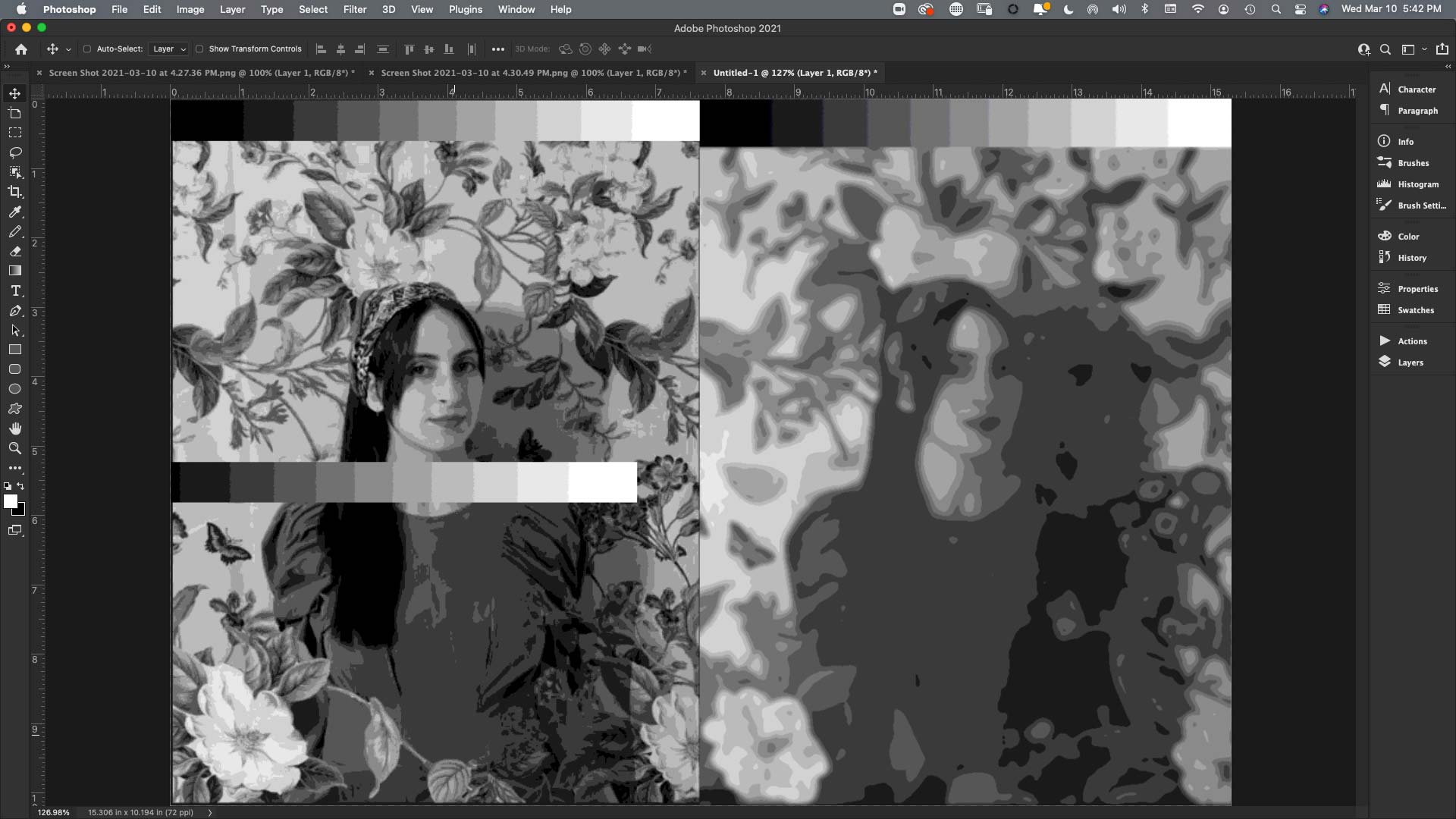 The ability to share his computer screen offers Marvin a myriad of possibilities to help make his point. Photoshop allows him to evaluate and correct each student’s painting-in-progress. Previously, he would either need to choose between telling a student what to do, and hope they interpreted his directions correctly, or show them what to do – by painting on their canvas himself – taking away their ability to make the changes themselves. He now can adjust and correct, to his heart's content, without ever having to touch their painting.

Marvin also employs Photoshop so his students can learn how to objectively analyze and evaluatie the myriad of relationships within their compositions and thereby make the appropriate choices to best manifest their pictorial intent.

The computer also provides Marvin with the means to incorporate a wide range of relevant multi-media presentations, highlighted by his Virtual Museum Tour. Here he analyzes the works of master artists, thus helping his students to understand the underlying concepts which formulate the strategies used by history's greatest painters of illusionistic imagery and form the core principles of his teaching. Never one to rest on his laurels, Marvin is constantly coming up with new and innovative ways to get his message across.

Taking Marvin's class is like getting the golden ticket in a Willy Wonka bar, you get a tour behind the scenes of a genius. The only thing that rivals his talent as a painter is his passion as a teacher. I was in my final semester at SVA when covid hit and thought my career was over because I would have to settle for stupid zoom classes. BUT, only Marvin Mattelson would invest all his time and money into as much technology possible to make the zoom class even more educational than a regular "hands-on” class. He currently has a multiple-camera setup, so you can see every aspect of his craft. Extreme close-ups of both his canvas and his palette that you would never get in an in-class setting. If you want to take your painting to another level, even if you are currently a master, take this class.

This new technology has greatly intensified the already incomparable experience of studying portrait painting with Marvin Mattelson. Students from across the globe can reap the benefits of his vast experience, knowledge and unique methodology. When approached logically, mastery over your painting is attainable. By deepening your understanding and enhancing your ability to make purposeful choices, your potential for growth is limitless.